skip to main | skip to sidebar

The plaintiffs state that Donald H. Deforge did not properly disclose that the vital pulp surgery he performed on their dog was not a permanent fix. They state they were never informed that the restoration to the tooth could become dislodged. Three weeks after surgery the restoration became dislodged. The plaintiffs state that Donald Deforge sent them an estimate via email to the surgery and this email never stated that this was not a permanent fix. Plaintiffs paid $1,200 for surgery resulting in a temporary fix to a problem. Plaintiffs were counter-sued by Deforge and deny all of his claims.
Posted by Concerned at 9:44 PM

This case is public record and can be read by anyone at the Meriden, CT small claims court.
Posted by Concerned at 11:56 AM 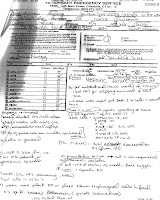